A Pro Liveaboard Forum For The Norfolk Broads 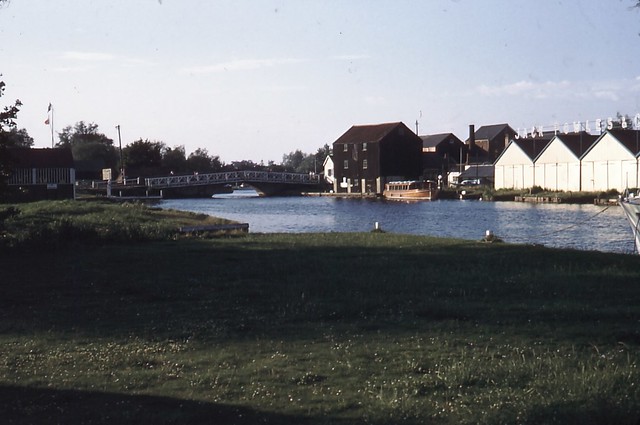 Nah! Wroxham I reckon. Old mills next to the bridge, my dad remembers them and the little shed. Least I think and he thinks it's Wroxham. Could be wrong. Will put some of my oldies up if I can find them.
Let the world flood! I live on a boat!

I think you are right as you can see the granary staithe and the chimney from the old mill which is where the KIng's Head is.

Wroxham bridge is still there to this day it's under the engineers bridge that is on top of the old bridge. Have a look next time you are up there. The bridge we drive under in our boats is the one above minus the railings and the Tarmac. What everyone drives over is a Bridge that was supposed to be a temporary bridge put up by the Royal Engineers back in the year dot! It was supposed to be temporary because Wroxham was supposed to be getting a bypass! Unfortunately the bypass would have run through the Avenues, you know the place? Big posh rich houses next to the river and heading to Wroxham broad! It never happened because Roys wouldn't sell some of their land and the architect forgot the river was tidal so bridge would have been too low!!! Someone recently has said the plans have been dusted off for another look at as the Northern link may cause an increase through the bottle neck that is Wroxham/hoveton. Certainly there are a lot of houses up the road to Wroxham barns that are up for sale..... It's just a rumour but then again is it?
Let the world flood! I live on a boat!

Its about time they knocked the bloody thing down, built a bypass round Wroxham and built a higher bridge as the water levels are continously rising. And the same goes for Potter Heigham bridge . Either that or have Bridge pilots on duty who will take private boats through and charge a reasonable rate and not try to fleece every one as they do at Potter Heigham at the moment. £10.00 each way is a total rip off!!!

Didn't used to be each way! The old guy who sadly drowned after too many in the pub used to do it for both ways as you had to come back! Typical money grabbing..... Got you over a barrel or rather the wrong side of the bridge!!! Did you know that years ago they were going to build a water bypass round the bridge so boats could go round it? It would have gone behind the chippy and come out where the boat yard is now between the two bridges. It all fell through because of the chippy, it would have made it only accessible via the old bridge and the bridge has a max gross weight MGW, of 7.5tons so if the chippy had a fire but was cut off from the main road by the water bypass then the fire trucks would have to use the old bridge and they weigh a lot more than 7.5 tons!!!!
Which is kinda a weird reason really, because buses and tractors with trailers use it all the time and I guarantee that a bus weighs a damn sight more than 7.5 tons!!! The things I know sometimes astounds even me! But living on a boat encourages you to take time out in the watering holes called pubs and people tell me things... And I've been round here quite a while in various guises and know a few people...course that may be all rumour too but I remember what people tell me!
Let the world flood! I live on a boat!

The royal engineers over bridge went many years ago, that had three flat sections which could cause lift off twice as you went over it

It was replaced maybe 30 years ago, with the designed for the purpose, curved smooth topped over bridge.
Top

It probably takes a man 15 minutes to take a boat through the bridge including walking to the boat, untying , manoeuvring through, tying up ( or just stepping off) and walking back to his office.
So that's £40 an hour, the taxman takes a minimum of 30% and you have to pay for his part of using the office, and companies expenses.
if the man is self employed, with no other employment while waiting for the next boat, then he has hours of no work, cutting the hourly rate to peanuts.
I would actually think they are making very little money out of it even at £10 a trip.
Top

See? These forums are brilliant as someone always know the real story or the reasons behind why things are done a certain way.... It's good to learn something new every day and I have.... My information was out of date... Too much Scotland I suspect! But nice to know about the bridge at Wroxham.... I do know that I used to be able to get under it but now for the last year I can't.... Heights ok but my roof curvature ain't right so I need more height under to get under... 7 feet never happens when I'm Up this end.
Let the world flood! I live on a boat!